The Prophet Yeshayahu, aka Isaiah, lived and spoke the word of the Lord during a very tumultuous time in the history of Israel and Judah. Syria attacked Israel and Judah four different times during his lifetime. It was ups and downs with godly kings following ungodly ones.

The way Israel related to God’s Truth reflected directly on how things turned out with them as a nation.

And justice has turned away backward, and righteousness stands from afar, for truth has stumbled in the street, and straightforwardness cannot come. And truth is lacking, and he who turns away from evil is considered mad, and the Lord saw and was displeased for there is no justice. [The Book of Yeshayahu – Isaiah Ch. 59:14-15]

In one of the dark moments of Israel’s history at that time, when all seemed lost, Isaiah identified something very significant: “Truth is lacking and he who turns away from evil is considered mad…”

What an incredible prophetic statement! Seems to be so relevant to the way things look today in America. The notion of “Truth” is frowned upon in the public square. People who choose to live humble and chaste lives are considered “nuts”.

Now let’s get some perspective here. To speak about “truth” in the 7th century BC is something remarkable. Folks, that’s 200+ years before what historians call the classical Socratic period! If you read Socrates and you read what the Hebrew prophets wrote about two hundred of years before him (not to mention Moses over 1,000 years earlier) you can only then begin to understand the supremacy of the Torah and the Prophets.

Looking at it from today’s perspective Western Civilization is rooted much more on Moses than any Greek philosophical tradition. Greek literary thought pales when compared to what Moses and the Prophets brought forth spiritually, intellectually and ethically.

Most people today have never taken the time to understand just what kind of light were the Torah and the Jewish people to mankind – for centuries. The world would truly be a lost, dark, paganistic hell on earth without the light of the Torah. Mel Gibson provided an artistic glimpse into the world of idolatry and paganism in his movie Apocalypto. This clip gives you an idea of what I’m trying to convey here.

But now the prophet is speaking not just of the Torah. He is speaking of The Truth, the very synthesis of God’s revealed knowledge – something worth living or dying for!

When we transition from simply revering Scripture to a place of accepting Scripture as a vessel for God’s Truth, it can be said that we have become “believers”.

A few days ago I was given a research by the American Bible Society that has to do specifically with Minneapolis. The bad news is that 70% of adults in Minneapolis are “disengaged” (67%) or “neutral” (3%). Only 10% have a “friendly” relationship with the Bible, 14% are engaged and 5% are “centered”. Centered would be people for whom it is a priority to live out the values and truths they discover in Scripture. The good news is that this 70 % do want to know more about the Bible. [Or at least this is what they told the pollsters].

These stats are probably not much different on a national scale even though I’m sure they vary from city to city and from state to state.

Given the low percentage of people who apply the Truth of Scripture as a guiding and deciding factor in their lives, is it any wonder America is in moral and spiritual trouble?

I will resist and expose the advancement of Islam, Neo-Marxism and whatever other false ideologies, philosophies, and religions try to creep in. But that’s only one side of the coin. Until the majority of Americans turns away from their “disengaged and neutral” attitude towards God’s Truth to one of reverence and engagement, only resisting the false will not get the job done. We will fall as a nation within a generation. The main reason won’t be that these spiritual, cultural and political enemies have been so powerful, it will be because the people of this nation would have chosen not to acknowledge the Creator and His Truth.

It’s a known fact that the more devoted the Jews become to the Torah, the more conservative, pro-Israel and pro-Liberty centric they become. When the Jews abandon their heritage and the Torah they become liberal and succumb to the same self-destructive mindsets as the American Left.

The same is true for Christians. The more liberal a denomination becomes, the more accepting of various perversions the people become, the more anti-Israel and pro-socialism they become.

Here’s a New Testament verse from the apostle Paul’s epistle to his spiritual son apostle Timothy (mistakenly considered a “pastor” and the epistles referred to as “the pastoral letters” of Paul. Timothy was the overseer of a huge metropolitan-wide network of family-based communities in Ephesus, not the “pastor” of a “local church” the way we think of it today.)

“…but in case I am delayed, I write so that you will know how one ought to conduct himself in the household of God, which is the church of the living God, the pillar and support of the truth.” 1 Timothy 3:15

The word church here is the word “ekklesia” which for hundreds of years was used in a specific civic scenario – to describe the governing council of the polis, the city. When Yeshua (aka Jesus) spoke about “the church”, he taught that this “church”, this ekklesia that he was going to be a Head of, will be like the governing council in the city. Those who were one with him would walk in love towards each other and would win the trust of the city by virtue of their honorable and godly lives.

Having forsaken the true teachings of the Messiah whom we call “Christ”, the Western world invented a new religion, Christianity. It is time to get back to the roots and the essence of the Truth of Scripture: the teachings of Moses, the prophets, Yeshua, and his apostles.

This is where I see the only hope for America’s spiritual and civilizational renewal and victory over the false “gods”, religions, and ideologies of the world. 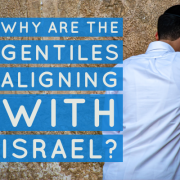 Why are the Gentiles aligning with Israel?
2 replies

The Four Conditions For Human Flourishing And National Prosperity

Christmas For Beginners
Scroll to top