Although hatred of the Jewish people had been a part of Christianity from its inception, the full virulence was not felt until the end of the 11th Century. During the high Middle Ages, Christian anti-Jewish passion reached its zenith. So strong was the anti-Semitism that many of the attitudes Christians developed regarding Jews clearly led hundreds of years later to the Holocaust – and are still widely felt today.

PDF: Brief history of antisemitism by the ADL

With the triumph of the Church during the reign of Constantine, for the first time Jews found themselves in a wholly Christian world. The Church, believing that Judaism was a rival to Christianity, saw many enlightened pagans and Christians attracted to the Jewish faith. Indeed, from the early contact between Jews and Romans hundreds of years before, there had been a stream of converts to Judaism throughout the empire, at times reaching considerable proportions. Unlike the pagan Roman empire, which was generally tolerant in matters of religion, the new Christian Roman Empire claimed to represent the only true faith – meaning that Judaism, and Jews, were an anathema.

In the Fourth Century, Constantine decreed that Jews could not prevent their co-religionists from converting to Christianity, and could not accept converts. Another law affected Jewish slave owners, stipulating that if a Jew circumcised his slave in accordance with Torah law, the slave gained his freedom. Later, the death penalty was prescribed for circumcision. In later centuries, Christian Roman law forbade Jews from holding public office or officers’ rank in the military. More...

In general, the Church found Muslim control of Christian holy places in Eretz Israel intolerable, especially when reports came from Jerusalem of harassment of Christians visiting the holy sites. As such, in 1095 Pope Urban II called for an army of Christians to conquer Eretz Israel from its Muslim rulers. Indeed, that Christians viewed Islam as a threat was hardly new. In the Eighth Century, for example, Muslims captured Spain and made inroads into France, before being defeated by Charles Martel's Frankish army. Slowly, the Christians fought back, beginning the reconquest of Spain. When the legendary Spaniard El Cid retook the important Spanish city of Valencia from the Muslims, the Christian world was greatly encouraged, feeling that the time was ripe to strike at the Muslim world. In addition, the Church saw as its mission spreading Christian rule, which they termed the “Kingdom of G‑d,” over the heathen infidel. More...

Life Under the Church

hurch and governmental authorities imposed many restrictions on the Jews. Princes declared the Jews to be slaves of the crown, a punishment that carried a blessing, as the Jews then received royal protection. However, while the Jews’ own personal liberty was preserved, they faced exorbitant taxation. Further, when a Jew died, his estate was seized by the king. In 1215, at the Fourth Lateran Council, Pope Innocent III enacted a number of anti-Jewish decrees, the most famous of which was that Jews must wear distinctive clothing. The purpose of this decree was to prevent friendships, and possibly intermarriage, from occurring between Christians and Jews. The ruling, borrowed from a seventh-century Islamic decree, did not specify what form the distinctive Jewish dress should take. Local authorities required them to wear a so-called badge of shame, a yellow circle symbolizing the Jews' alleged love of gold. The Nazis later changed this yellow circle to a yellow star. In England, Jews were required to wear the insignia of the Two Luchos, or Tablets of the Law. The Vatican Council also decreed that Jews could not hold any public office that would place them in a position of superiority over Christians, an edict also copied by the Nazis. More...

In the Middle Ages, many delusional beliefs about Jews gripped the European masses, some of which were later modernized by the Nazis. There were at least 10 such superstitions, traces of which can still be found today. More... 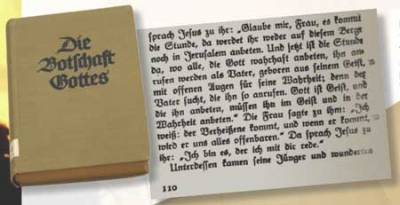 The so called Hitler Bible was a “dejudaized” version of the New Testament, titled Die Botschaft Gottes (The Message of God), and released in 1940. This was a book of some 304 pages, with about 60% fewer words than in the German Luther NT. The Foreword by Grundmann and others said it was a selection from the New Testament which had shed new light for them. It contained no books from the Old Testament, and was never called a Bible, let alone Hitler’s Bible. Full article.https://creation.com/hitler-bible

Except where otherwise noted, content on this wiki is licensed under the following license: CC Attribution-Noncommercial 4.0 International