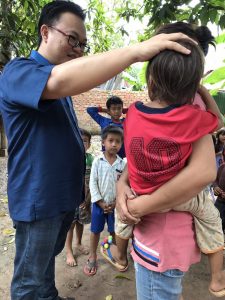 Arnold is praying for kids in Cambodia

Threefold’s Kingdom Ally in Indonesia, Arnold Sigik was born and grew up in Indonesia, the largest Muslim populated country in the world. Yet God found him there at the very young age of 16.

When God’s calling came to Arnold he was still attending High School. He considered leaving his school immediately to attend Bible School. But everyone suggested that he finished his schooling first and get a degree, just in case his ministry endeavors would have not worked out. With his degree, he’d then be equipped to secure himself a job. Arnold only finished high school in 1992, then left home for Bible School and never returned again. From that day forward his life was dedicated and focused on serving the Lord Jesus.

As a side note and thanks to God, Arnold had no need to ever used on his only high-school-certificate to apply for a job at any time. Every position he has ever had came as a blessing directly from the Lord. Arnold’s very life became a passionate example of a man that seeks after the Lord’s heart, and the Lord has taken care of him along the way. The Lord is his Provider.

Over the last few years, God began to launch his ministries internationally. He started as an interpreter and preacher, ministering in small churches throughout many Indonesian cities which, the servant that he is, he still does to this day. But also, Arnold now finds himself called to preach into the pulpit of the nations.

“Ask of Me, and I will give you the nations as your inheritance,” is the Biblical promise which has driven this Indonesian missionary to go to the nations.

If you live in the US and would like to give a tax-deductible gift to support Arnold in the work God has called him to do in the nations of the world, you can do so by giving via PayPal or by sending a check out to Threefold.

If you prefer to send a check, please make the check out to Threefold Christian Alliance, put a note on the check Indonesia and mail to:

We will transfer 100% of your gift to Arnold and will mail you a letter documenting your gift at the end of the year.

If you live in a country other than the US and would like to give directly to Arnold (i.e. tax deduction in the US is not important to you), you can visit Arnold’s Missions Partner page and make a donation for his work directly through his PayPal account.

If you live in Bulgaria and would like to make a donation for which you need a donation receipt, please email us at admin@apostolos.bg